Last helicopter flight and departure from McMurdo with a C17!


The day before our departure, on November 15th, we did our last flight over the Cape Crozier emperor penguin colony! 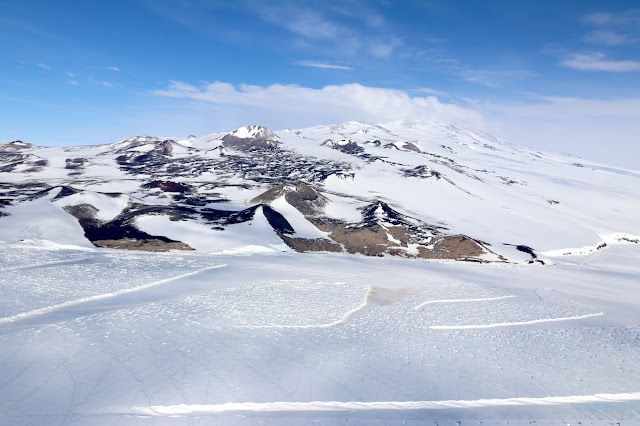 Penguins kept moving from the first flight in October 25th to the last flight on November 15th!

Our counting is not yet finished, but so far for the Cape Crozier colony, we had for the first flight 1536 penguins, then 1762 penguins for the second flight and 1696 penguins for the third flight! We still have to count the 4th and 5th last flight!

We still have Cape Washington and Franklin Island to count!

Beautiful landscapes during our last flight, with a lot of emperors and Adélies leaving the colony to feed at-sea through ice holes and cracks more and more frequent late in the season. 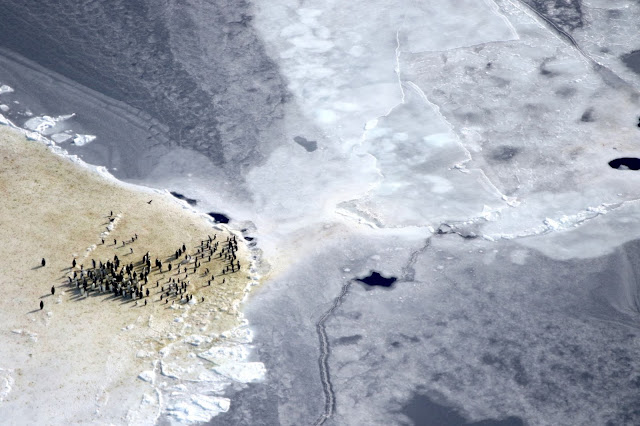 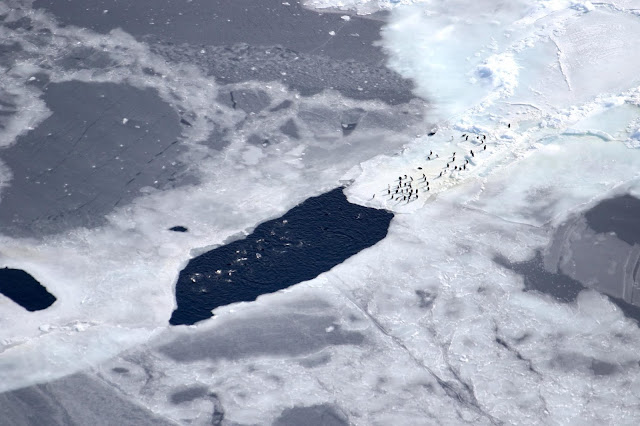 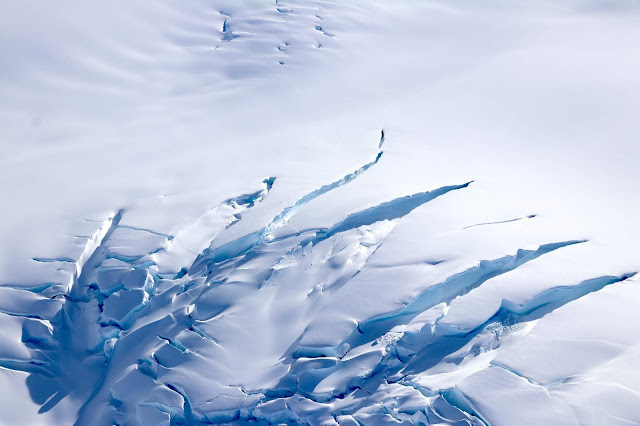 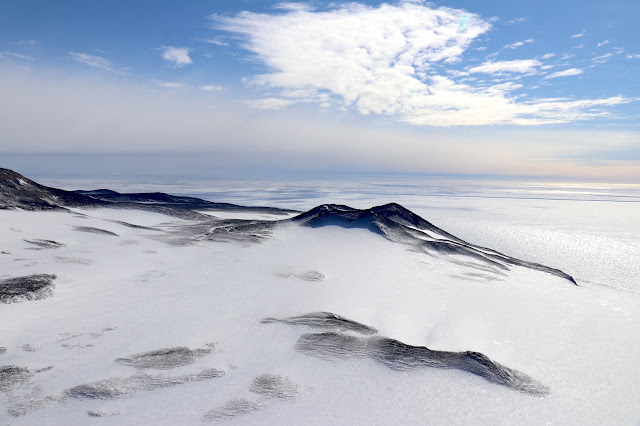 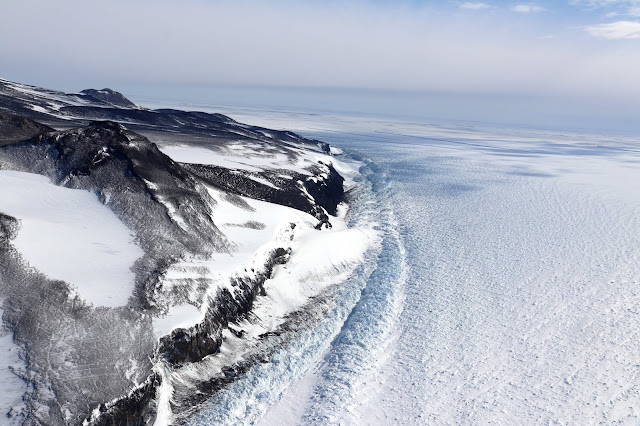 We still observed some Adélie penguins attempting to breed in the sea ice despite they can't prevent their eggs to be frozen. They need rocks!

We left McMurdo on November 16th, with the very impressive C17! The team was quite tired after this amazing season! More bonus pictures of our fieldwork are coming soon! 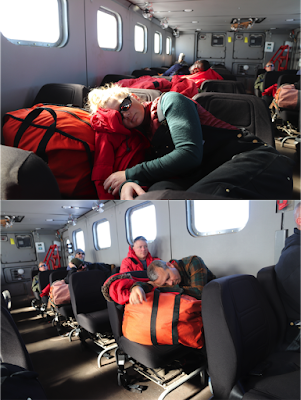 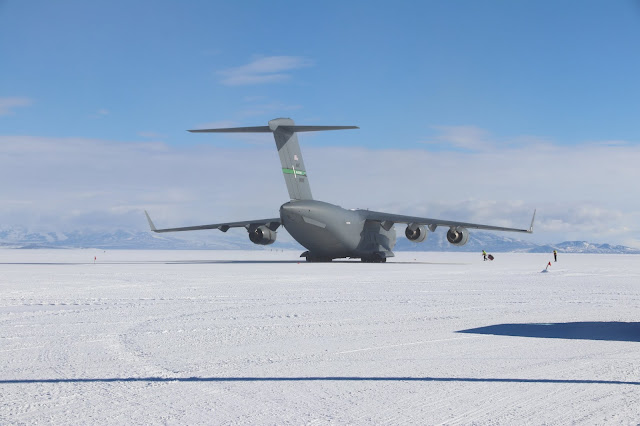 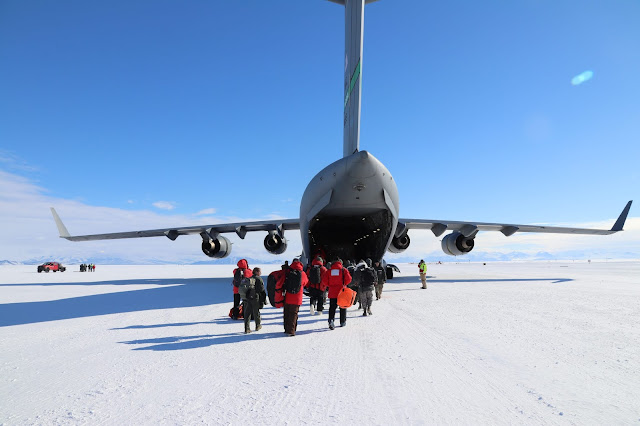 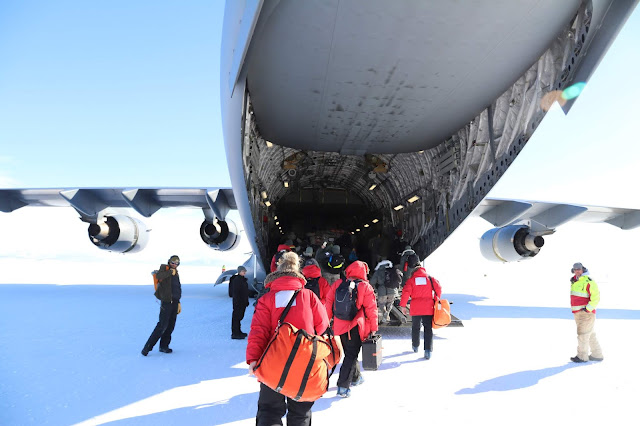 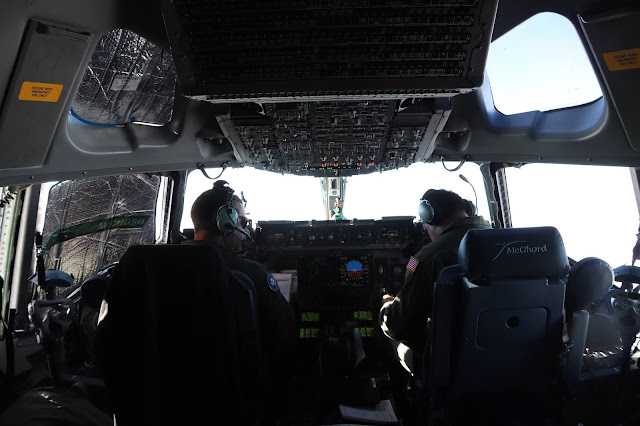 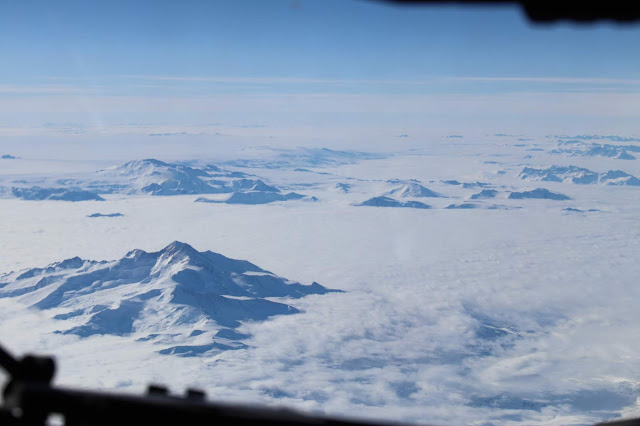 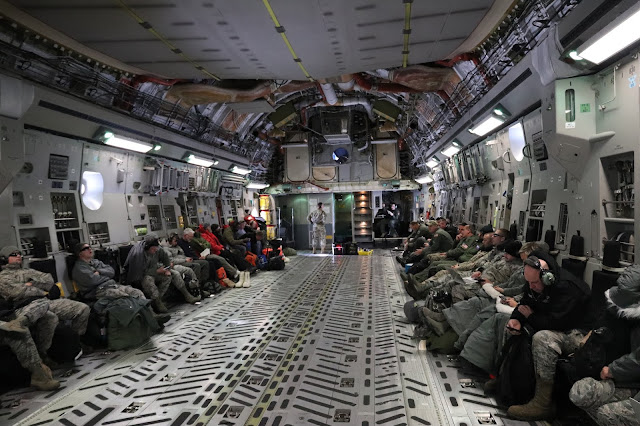 Some news from our last two weeks in McMurdo! 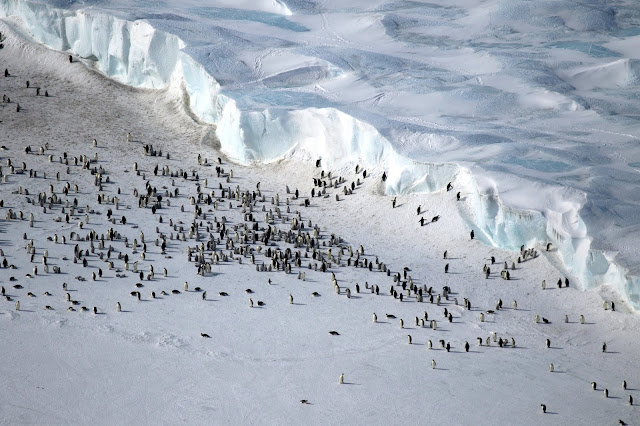 The flights were really interesting with emperor penguins moving within the ice shelf crack during the season!


We also observed an usual behaviour of Adélie penguins attempting to nest on sea ice, which has been rarely observed so far. Indeed, contrary to emperor penguins, they can't prevent the eggs to be in contact with sea ice, thus the one nesting in the sea ice would certainly have their eggs frozen if they reached the laying stage. This is one of the reasons Adélie penguins usually nest on rocks! 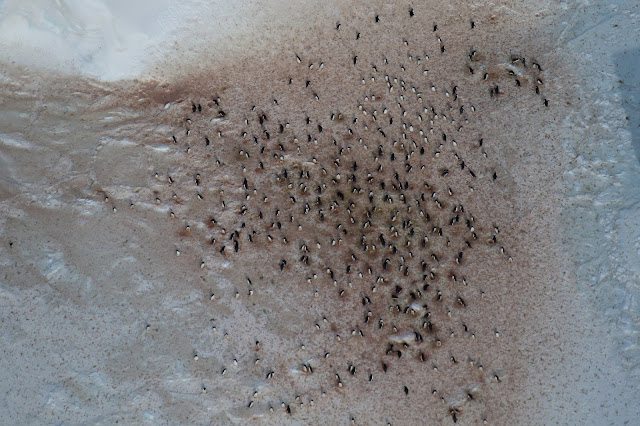 We also continued our outreach skype session, Leo did a skype in the aquarium while Michelle spoke to students from observation hill! 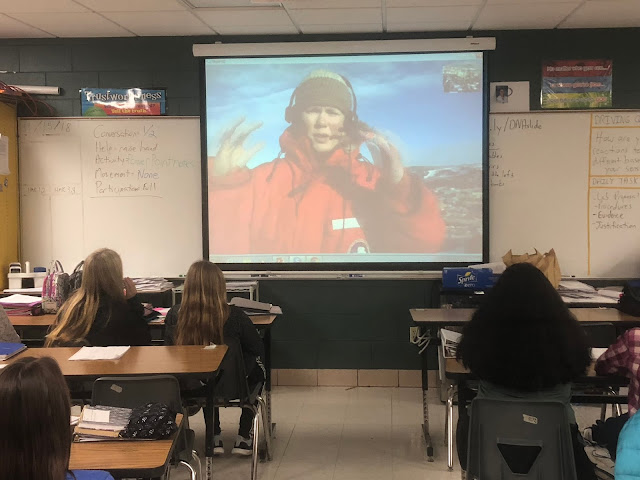 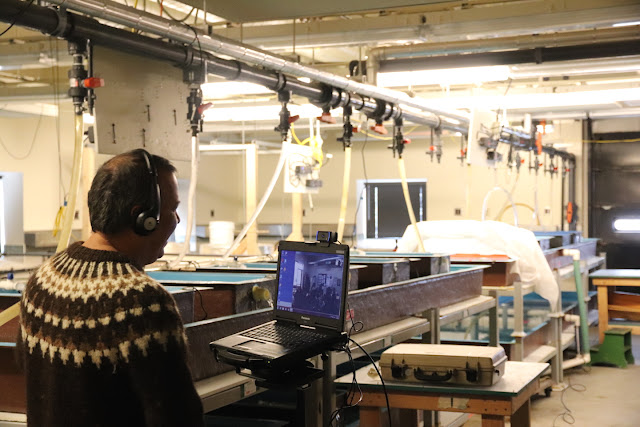 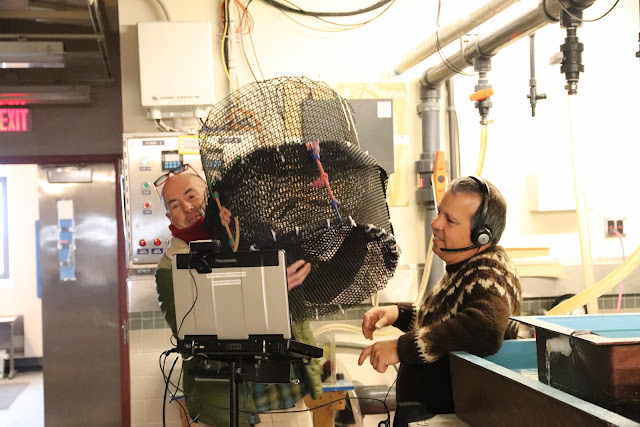 
Back in time, we did the second helicopter flight on October 29th!

We were really surprised to see open water much more closer to the colony than 4 days before!

We counted 1536 penguins during the first flight, while for the second flight we had 1762 penguins! 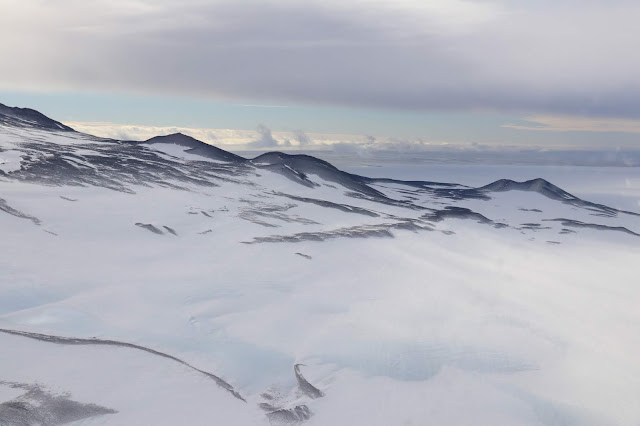 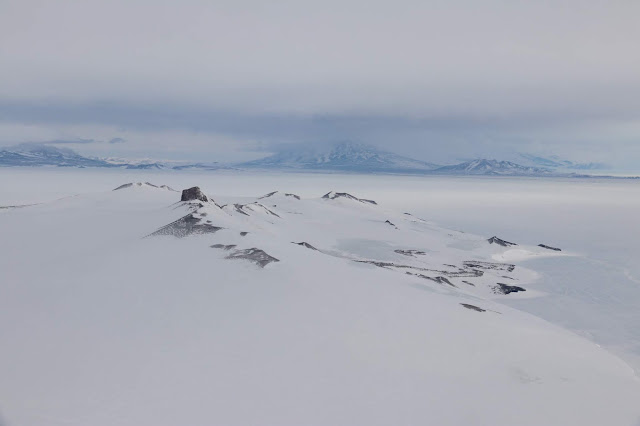 Our fieldwork will finish at the end of the week, we still have two more helicopter flights to do, but in the meantine we have been counting Cape Crozier (1664 penguins), Coulman Island (19 822 penguins), Cape Roget (5221 penguins) and Beaufort Island (462 penguins) colonies. We always try to turn the 3-hours (up to all day) counting sessions into a good team moment - pizzas time! We also had the help of Max, a firefighter, which was very nice! We are also starting to analyse the satellite images, determining the "penguin" pixels from the "guano (penguin poo) and ice" pixels.

We had the chance to help the divers working under the sea ice in 29 degree F water for the McMurdo Oceanographic Observatory. They shared their diving experience with us and their amazing diving footage after we assisted. Why is this a great experience for us? Other than seeing some really cool things, very importantly: Emperor penguins eat things that are underwater, including fish, krill, and even squid. It was fascinating to see the under-ice environment where our study species hunts for their lunch.

The McMurdo Oceanographic Observatory - the MOO - was conceived in order to provide researchers with real-time, high-quality scientific data of ocean conditions under the solid sea ice cover of Antarctica's frigid Southern Ocean. It was installed by scientific divers and other personnel in late 2017, seventy-feet (21m) below the surface of McMurdo Sound in the southwestern Ross Sea, Antarctica.

The installation consists of a live-streaming HD video camera that can point and zoom in all directions, a high-definition underwater microphone, and sensitive sensors that measure basic ocean conditions such as temperature, salinity and tides.

The primary purpose of the McMurdo Oceanographic Observatory is to support studies on the freezing-avoidance abilities of Antarctic notothenioid fishes. The 130 species of this group live almost exclusively in the coldest and iciest waters of Antarctica's Southern Ocean. While your everyday fish would freeze solid almost instantly under these conditions, notothenioids possess special antifreeze proteins in their blood and other body fluids that protect them from freezing to death in icy waters.

We've spent the last few days working through the tens of thousands of images we collected on our 1000-mile flight across the Ross Sea, and reflecting on the information we gained. The good news: trip was a success and the images will be perfect for getting population estimates. The better news: we also squeezed in Halloween celebrations with the rest of the McMurdo base on Saturday night!


The annual "town Halloween party" is legendary in McMurdo. Some people even plan their costumes months in advance! Luckily, folks who don't remember to pack a Halloween costume can rent elaborate costumes from the station's gear issue office! The night kicks off with a halloween costume competition, followed by a dance party. Winning costumes this year were: "Where's Waldo" (individual category), "Hulk Hogan and Macho Man Randy Savage" (group category), and "Fleetwood Mac Ops" (McMurdo-themed category).


On Sunday Michelle delivered the weekly "Sunday Science Lecture" to a packed room.  She focused her talk on two of her ongoing projects: our current emperor penguin study and a second study of Weddell seals.  Both projects rely on using high-resolution satellite images to count animals from space, greatly improving our understanding of these animals in inaccessible areas of the Antarctic continent. 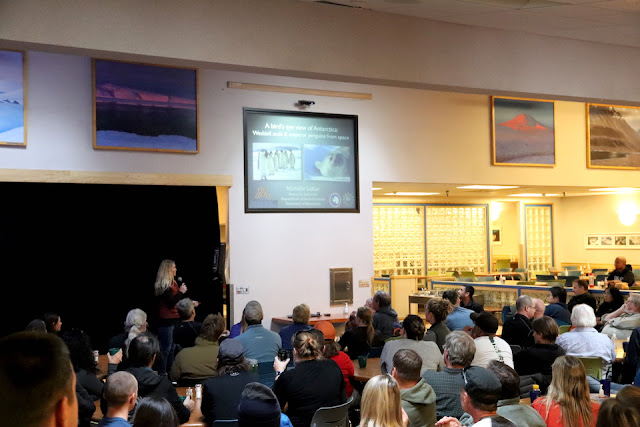 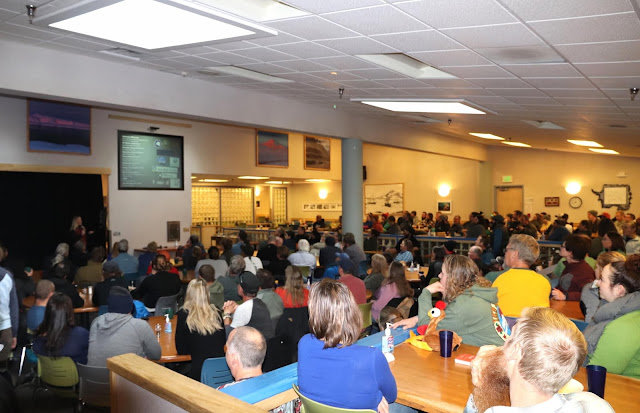 We have also begun to do outreach by Skyping with gradeschool classrooms across the USA. Amazingly, McMurdo even offers us the ability to connect to Skype from a nearby mountain overlooking the town!  This lets students take in the beautiful scenery while we chat with them about penguin ecology. Unfortunately, the time zone difference between McMurdo and the USA means that our Skype sessions need to happen at 6 am McMurdo time! So far, we had skyped with a 7th grade class from Los Angeles (LAUSD school) and a 5th grade class from Potaluma (McKinley Elementary school).

We awoke on October 31, 2018 (Halloween day!) to fantastic news: our 1000-mile survey flight to five separate emperor penguin colonies was a go! We excitedly gathered our extreme cold weather gear (which we’re required to wear on any Antarctic flight operations), ate a hearty breakfast, and hopped in a 7:15 AM shuttle to the airfield. McMurdo’s Phoenix airfield is located on the Ross Ice Shelf, about a 20 minute drive from the station. 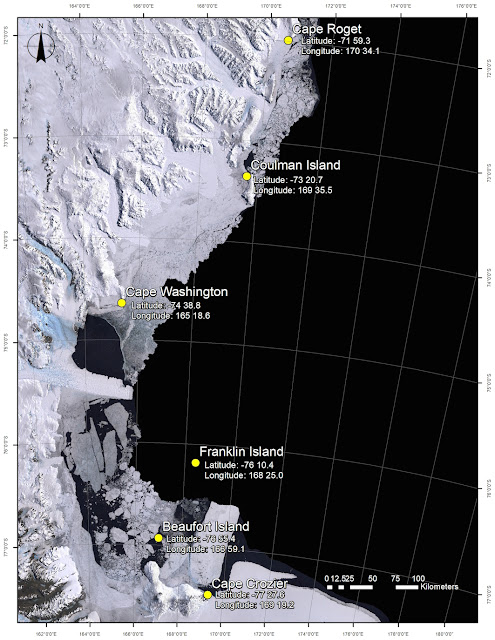 At each colony we took several looping passes in the airplane, allowing us several attempts to get “perfect” photos from which we can accurately count penguins. Amazingly, the weather conditions were perfect all day.


Our 9-hour flight took us over hundreds of miles of undulating sea ice, around permanent ice shelves that sink hundreds of meters into the ocean, and past innumerable 1500-foot cliffs that drop straight into the sea ice. Amazingly, we even flew past cliffs that were packed with tens of thousands of daring Adélie penguins that somehow managed to scramble 1000 feet up a rock wall!
We arrived back at McMurdo just before dinnertime, excited to sort through the thousands of stunning images we collected throughout the day. In only a few short weeks, we’ll have counted every single emperor penguin in each of the Ross Sea colonies – which will get us one step closer to providing an estimate of their global population size.
Posted by Mission Antarctique 2017 at 4:20 PM 6 comments: 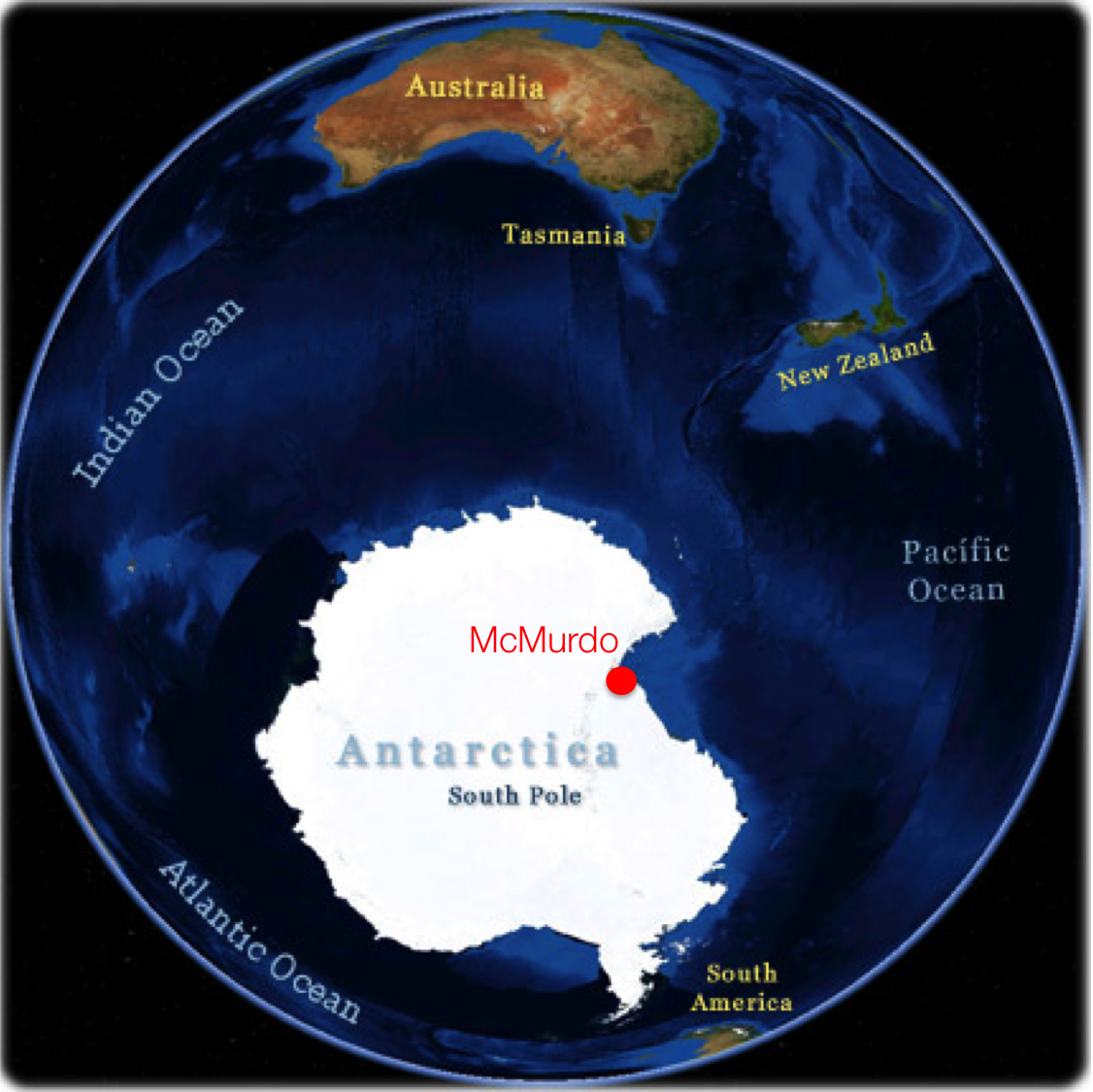 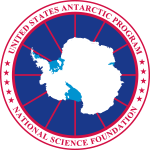